Your Gut has a Brain 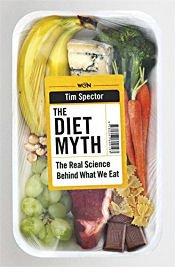 We have been hearing a lot about the importance of our gut bacteria these days, so I was very interested to read The Diet Myth by Tim Spector. I heard about him on CBC last October and tried to get a copy of his book then. It was sold out on both Chapters and Amazon and, when I signed up to reserve it at my local library, I was number 35 on the waiting list.

Now I have finally read it and I think there is some key information related to our brains and our general health.

According to Tim Spector, Professor of Genetic Epidemiology at King’s College, London, England, “The gut is the second-largest network of nerves outside of our heads and has been called our second brain. … A complex system of signals relays information to and from the brain and the gut. … We looked recently at rare twin pairs containing one depressed twin and one happy one. In the affected twin’s blood we found altered levels of the key brain chemical serotonin. This chemical comes from our food except when we are fasting, when our gut microbes manufacture it for us. So changes in our microbes will alter this key brain chemical and, potentially, our mood.”

I was amazed to hear that serotonin is made in our guts. So I googled “How is serotonin made?” The most credible information came to me from
from California Institute of Technology’s Microbes Help Produce Serotonin in Gut, backed up by Wikipedia’s information on Seratonin.

I certainly know this from ‘lived experience’, as they say. When I was severely depressed a few years ago, I lost 35 pounds in less than nine months. A microbiologist friend of mine says, “Yes, serotonin is produced in our guts.” One of the key effects of antidepressants is to try to increase serotonin production and retention in the brain, but how about considering our brainy guts as a possible source of protection against depression?

After 20 years of studying Epigenetics in thousands of identical and fraternal twins, Tim Spector has some fascinating information to share. Epigenetics is the study of the chemical switches which can turn your genes on or off. Spector has discovered that nurture can and does act on our nature (our genes). And where this happens on a daily basis is in our guts through our microbes. He says that microbes have been with us for billions of years, we have co-evolved with them. They outnumber all the cells in our bodies 10 to 1 and they have 100 times more genes.

In a healthy gut, we have about 100 trillion microbes and they weigh about 4 pounds!

The key message from Tim Spector is there is no such thing as a one-size-fits-all diet. Our guts and our brains are completely individual, so the way we react to foods is very different and flexible.

Identical twins at birth have identical genes and DNA in every cell, but as they grow up, their gut bacteria develops differently. Spector’s studies have shown that even when identical twins are followed closely and their food, exercise, and environment is monitored to be a similar as possible, the weight gain between any two twins can vary as much as 4-13kg.

Spector says, “Treat your own microbes like you would treat your garden. Give them plenty of fertilizer, fibre, and nutrients. Avoid poisoning your microbiotic garden with preservatives, antiseptic mouthwashes, antibiotics, junk foods, and sugar.”

He does not recommend any particular diet, but he does say that calorie counting is distracting and unhelpful. He does recommend you experiment with a wide variety of fruits and vegetables, increase your consumption of fish, lentils and beans, smelly cheeses, and dark chocolate (70% cocoa or more). And have the occasional glass of red wine.

The information included in this chapter of Get More Power from Your Brain is in order of effectiveness to get and keep your brain as healthy and productive as possible. The most important thing to understand about your brain is that it can continue to grow new neurons and dendrites throughout your life.

When you sign up below for Dynamic Learning's monthly newsletter, you'll receive our new blog post along with recommended resources. AND you'll get this handy reference guide as a bonus.

(You can easily unsubscribe in the footer of every issue.)

Please enter a valid email address.
Sign Me Up

Thanks for subscribing! Please check your email for further instructions.

Something went wrong. Please check your entries and try again.