It feels as if ***’s behaviour instantaneously makes us angry, but really it is our own thinking that is making us that way. When we tell our subconscious, “*** should listen to me,” when clearly *** is not listening to you, your subconscious will get very angry or anxious because it believes exactly what you’re telling it.

In fact, you don’t even behave as you think you should behave sometimes.

How often have you told yourself you should or shouldn’t do something, and then just ignored your own advice? It’s more rational to recognize that, although you would rather other people behave as you’d prefer, getting angry and frustrated about it is like getting angry with the weather. The following chart outlines popular Irrational Thoughts and the corresponding Rational Disputes that will give you more power.

You can use the chart below to reduce your stress about a situation that has caused you trouble in the past and that you anticipate may happen again. 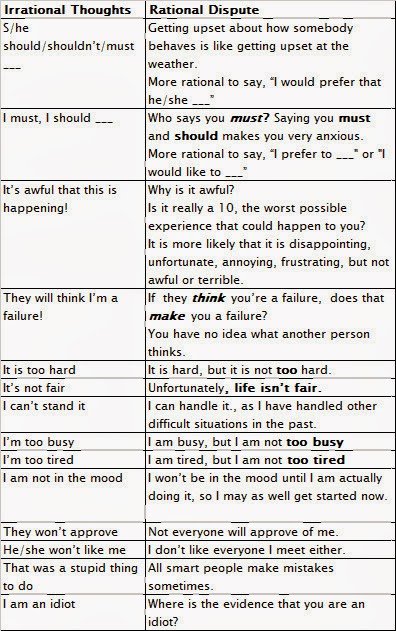 Imagine you are in the middle of the situation again, for example – missing a deadline with your boss. Enter that as A, the Activating Event. Then, continue to imagine yourself in the middle of the situation, and record the different strong, unpleasant feelings under C, Consequences. Choose one of the strongest, most unpleasant feelings. Visualize yourself in the middle of the situation, feeling that feeling, and record the exact words you were probably saying to yourself at the time. For example,” My boss will be really angry with me.” Record your words under B. Then say to yourself, “If she is really angry with me, that means _____” and record the words that next come to mind. If _____, that means _____ – until you find yourself writing down an irrational thought (as described above). Then choose a Dispute that makes sense to you and record it under D, Dispute. Whenever you start getting uncomfortable about the issue, say the Dispute firmly to yourself as often as you need to until you feel strong enough to handle it differently. 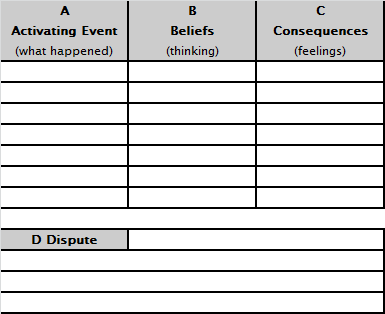 The next time that situation arises, and you begin to feel those strong, uncomfortable feelings, say the Dispute to yourself several times and notice how your feelings change.

As you practice Rational Thinking, you will find that you can turn difficult situations into interesting challenges and even opportunities for growth. Listen to your thoughts, identify when they’re becoming irrational, and figure out a rational dispute.

The information included in this chapter of Get More Power from Your Brain is in order of effectiveness to get and keep your brain as healthy and productive as possible. The most important thing to understand about your brain is that it can continue to grow new neurons and dendrites throughout your life.

When you sign up below for Dynamic Learning's monthly newsletter, you'll receive our new blog post along with recommended resources. AND you'll get this handy reference guide as a bonus.

(You can easily unsubscribe in the footer of every issue.)

Please enter a valid email address.
Sign Me Up

Thanks for subscribing! Please check your email for further instructions.

Something went wrong. Please check your entries and try again.